We are so sad to announce that star of the original Willy Wonka and the Chocolate Factory has passed away, as of Monday morning, at the age of 83.

Gene Wilder, who’s real name was Jerome Silberman, lived a full and prosperous life. He found his passion for acting and comedy when his mother’s doctors asked him to entertain her once they diagnosed her with rheumatic fever. His first paid acting role was as Mercutio in a stage production of Romeo & Juliet. Looking up to historic comedians such as Charlie Chaplin, he desired to bring joy and laughter to the lives of his audience. Because of this desire, he successfully took the comedy and entertainment industry by storm. The comedic actor came on the film scene as a hostage in Bonnie and Clyde, starring Faye Dunaway and Warren Beatty, in the 60s. After this, he starred in many roles in films, directed and wrote for films, and became an author.

Most of us millennials might recognize him from the memes that portray the, “Tell me more” face (below). Our parents, however, would probably remember him from movies such as Silver Streak and Stir Crazy (also starring his BFF, Richard Pryor, who preceded Gene in death in 2005). 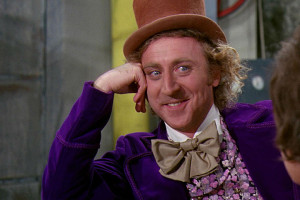 Sources say that Wilder suffered from complications with Alzheimer’s disease. We, at Celebrity Slice, would like to offer our condolences and thoughts to the friends and family of Gene Wilder. We know this is cliche, but find peace in the fact that he is no longer suffering.

By the way, much love to Getty Images for the images.

Thank you so much for taking the time out to read Celebrity Slice today. Please share the fun with your social network of friends & follow us on FB, Twitter, & IG!