The last time we heard from Frank Ocean was back in 2012 when he dropped his Billboard and Grammy award winning album, Chanel Orange, including hits such as ‘Pyramids‘ and ‘Thinkin Bout You‘. A few months back, a little birdie told us at Celebrity Slice that he would be dropping new music late summer or early fall. In true character of shock and entertain, late Thursday night, Mr. Ocean dropped his very emotional, yet extremely alluring, visual album titled, Endless.

Frank had been totally MIA for the majority of the four years fans were waiting on him to drop some new art. Endless seems to be his way of letting us all in on some of his life during that time.

Today on Apple Music and on his website, Frank released a video for ‘Nikes’ which beautifully breathes passion and heartache all at the same time. In this NSFW video, we hear a mix of rapping and singing, auto-tune and falsetto, soft melodies and head banging beats.

We are given visuals of different perspectives of beauty and fierceness, including a saddened Frank wearing a perfectly cat-eyed eyeliner at the beginning, a woman laying naked on a white horse, a man on fire, and glitter exploding from a woman’s lower private parts. All very interesting, I must say. 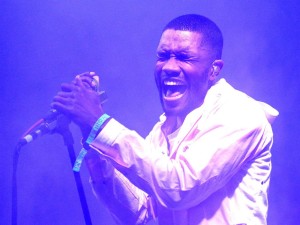 Some of the lyrics behind the music reference a shout-out to Trayvon Martin and Pimp C. Mr. Ocean claimed on his Tumblr page and at the top of the ‘Nikes’ song that he has two versions. Will he unleash another piece of art to us next week? I’m willing to bet he has a few tricks up his sleeve that he is waiting to share.

All we can do is stay tuned and stay excited! Thank you for sharing your art, Frank!

UPDATE: Frank Ocean releases Blonde on Apple Music as of 8/22 for a limited time. Take a listen!

By the way, shout-out to Getty Images for the imagery.