Chicago’s only beachside summer music festival, is thrilled to announce the artist lineup for its highly anticipated third year! The musically eclectic festival will take place from Saturday, June 24 and Sunday, June 25, once again on the grassy-field and sand-swept coast of Oakwood Beach.

Two-Day, VIP and Single Day Tickets Are On Sale Now at mambybeach.com!

Featuring a backdrop of Chicago’s iconic skyline and Lake Michigan’s shimmering waters, the Beach Stage will play host to some of the most defining indie, electronic and hip hop artists of the era. Leading the charge will be the kings of psychedelic rock MGMT along with chart-topping alt pop band WALK THE MOON and returning to Mamby for an extraordinary live set are legendary beatmakers CUT COPY. Additional acts include soulful electronic champions MIIKE SNOW, sensual R&B-hybrid duo MARIAN HILL and tropical house master KLINGANDE. In support, fiery performances from RAURY, STRFKR, MUNA, RAVYN LENAE, GAVIN TUREK and more will keep the inclusive beachside vibes in full swing.

Meanwhile, on the lush grasses of the Park Stage, attendees are invited to kick back and groove to a diverse group of crossover acts from all corners of the hip hop and electronic gamuts. Standout live acts include joyful pop pioneers MISTERWIVES, twisted beat scientist FLYING LOTUS, indie-pop quintet LOCAL NATIVES, Norwegian disco idol TODD TERJE AND THE OLSENS and esteemed multi-instrumentalist virtuoso THUNDERCAT, fresh off the release of his critically acclaimed album Drunk. The Park Stage will also see performances by the voice of Chicago’s West Side SABA, MUTEMATH, SANGO, PHOEBE RYAN, SIR THE BAPTIST (based in Mamby’s home of Bronzeville) and more.

Mamby’s dedicated electronic stage, curated for a second consecutive year by dance industry leader Mixmag, is primed to host hypnotizing rhythms and underground beats for two days straight. Headlining the Mixmag Tent is historic techno trailblazer GREEN VELVET celebrating the 25 year anniversary of his Chicago-founded label Relief Records, best known for releasing legendary tracks such as the Percolator (1992) and Flash (1995). In honor of the celebration, Green Velvet helped curate the lineup with support from JUSTIN MARTIN, MK, LEE FOSS, fellow Relief recording artist LATMUN and more. Future house producer TCHAMI will be taking over headlining duties on Saturday, along with support by Belgian funk-centered powerhouse THE MAGICIAN, SAMF FELDT, JUSTIN JAY, WILL CLARKE, DJ HEATHER and more. Step out of the sun and experience a daytime beach club like no other as the Mixmag Tent provides nonstop dance fuel all weekend long.

Your Mamby On The Beach Guide — 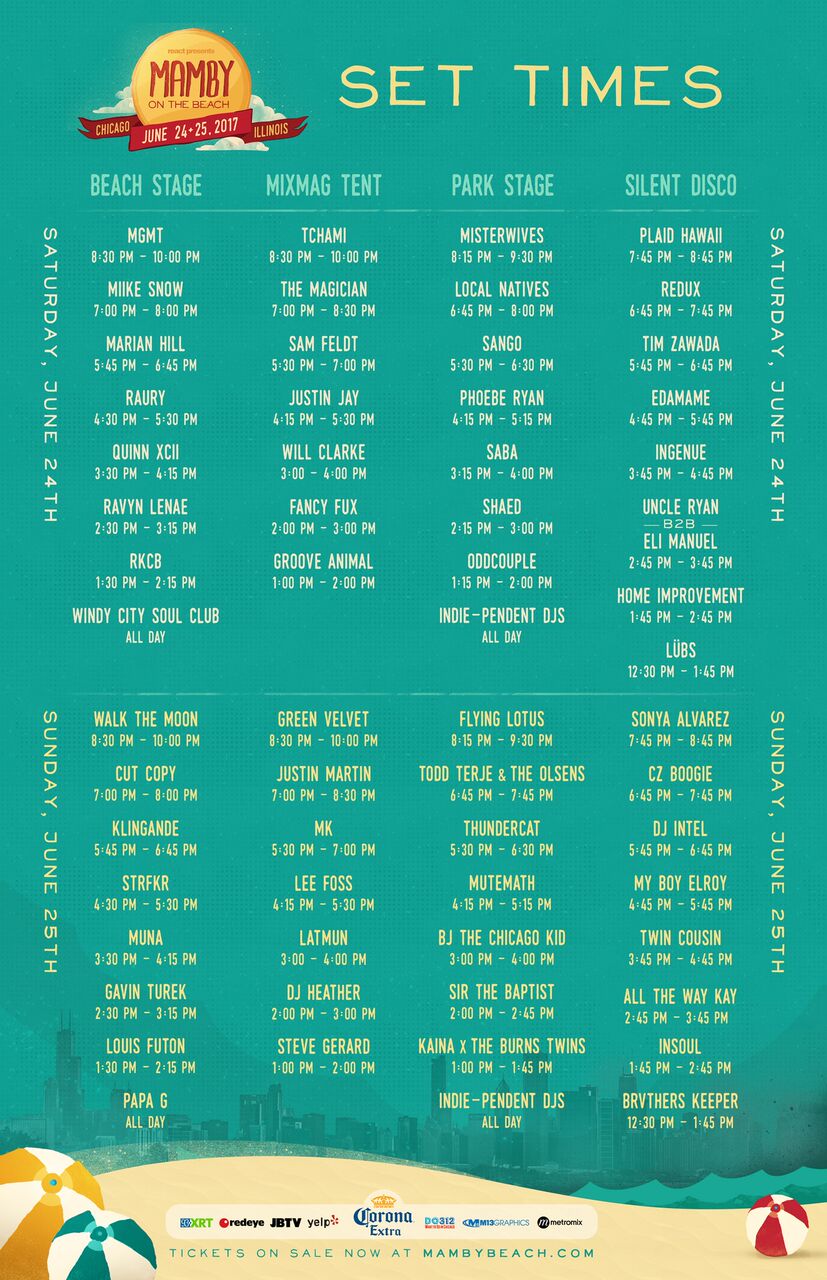 As the countdown to Mamby ticks down, GREEN VELVET visits the beachside festival grounds to reminisce on his career and his excitement about performing in the city for the 25th Anniversary of Relief Records. In anticipation of his takeover at the Mixmag Tent, we caught up with the acclaimed house legend to hear about his musical beginnings, Windy City history, why he started Relief Records, and the meaning behind his upcoming celebration at Mamby. Watch the documentary below.

Once again, Mamby’s More Than Music Series will offer a variety of free activities for attendees, which is one of the things that makes the festival a truly unique experience. This year attendees will enjoy even more activities from wellness workshops, Nadi yoga sessions and beach-friendly games, to other inclusive forms of expression including live painting, fire performances, tarot card and palm readings, along with meticulous art installations created by Chicago’s Bam Creates collective. For those looking to get pampered or up their festival fashion, the Braid Bar, Henna and Body Art Domes and the Red7 Salon “Beach Beauty Oasis” are a must.

Returning to Oakwood Beach will be a one of a kind Burning Man favorite, the Solarbeatz Art Car. Standing as the “ultimate exhibition of clean energy,” the Solarbeatz Art Car is a mobile soundstage and performance venue fueled by an array of electronics to create an outrageous audio-visual experience all powered by the sun! Over the course of the weekend, the Art Car will host a wide assortment of activities including silent disco yoga along with wellness workshops. A full event schedule will be released soon.

The fest ends at 10pm but your night doesn’t have to! We’re thrilled to announce this year’s Official Afterparties! Whether you’re looking for an intimate DJ Set at the MID, a live performance at Concord Music Hall, or a rooftop party at the Virgin Hotel’s Cerise, we’ve got you covered. Tickets to Mamby’s after parties are on sale now and we’re anticipating these to sell out so don’t delay in securing your late night adventure.

Ticket links below, or if you’re feeling lucky head over to the Do312 page to enter to win a pair of tickets to each afters! 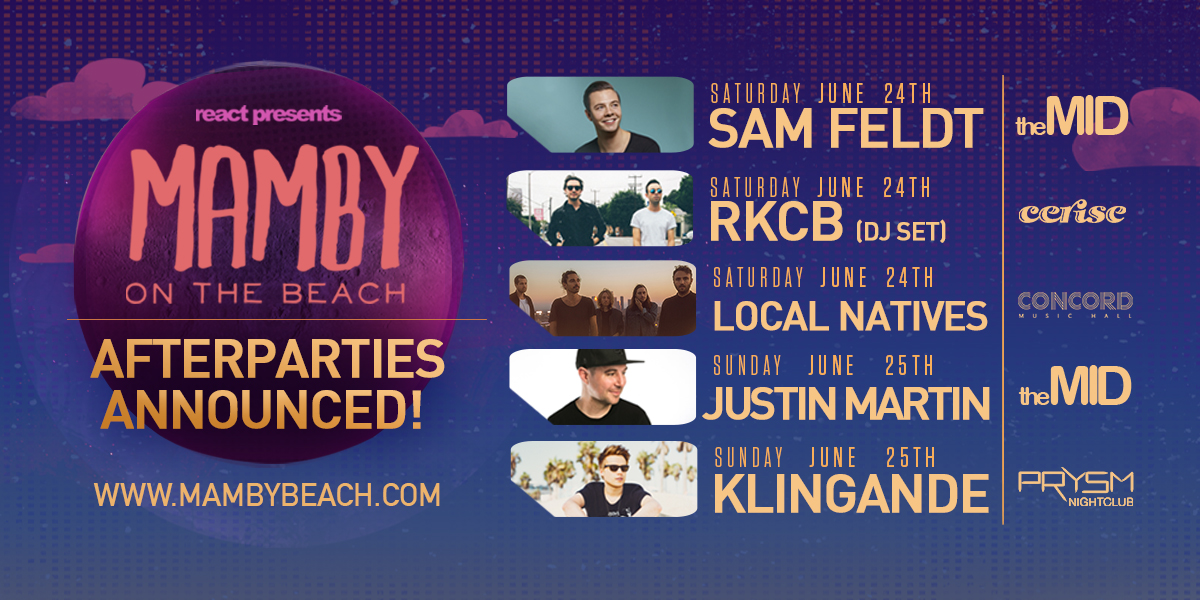 It’s going to be one awesome weekend! We can’t wait! Don’t forget to grab your tickets. See you there!