If you hadn’t heard by now, R&B singer, Tamar Braxton, and music writer and producer, Vincent Herbert, have been the spot of some controversial rumors over the last few months with regards to their 8 year marriage.

Earlier this summer rumors of Tamar stepping out on Vince and having intimate relations (yes… those kind of relations) with an unknown high-profile man hit the streets. Allegedly, Vince found out about the betrayal and the two got into a huge and embarrassing argument in front of some guests last month. Sources say that the guests were paid to keep quiet about the argument that they witnessed, so apparently, some dirty details were shared.

Clearly, things have not gotten any better for the couple, regardless of what we see on Braxton Family Values or on social media. In the late evening of August 21st at the Ritz Carlton in Atlanta, GA, their disputes got even more heated to the point of domestic violence! Sources say an argument began between the spouses, things got violent, and Tamar called the police. By the time authorities arrived, Vince had fled the scene. Tamar told authorities that during the physical altercation, Vince bit her so hard that it drew blood. She refused to go to the hospital to have the wound cared for properly, although they told her she probably needed stitches. 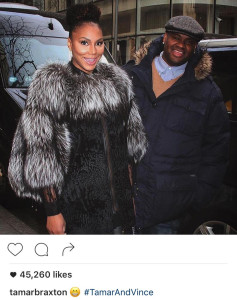 Now we all know TayTay has a mouth on her and it can be difficult to speak to her at times, but there is no reason for any dispute to ever become violent between two people who claim they love one another. If it gets to the point where the desire to throw hands (or teeth in this case) occurs, walk away until you can talk about the issues like an adult. If you feel you can not come back and have a mature discussion, it may be time to cut ties. Point blank, period.

If Vince and Tamar end up in a marital separation or divorce, Vince has made it well known that he wants full custody of their son, Logan. After that episode the other night, getting the desired custody will be a lot more difficult for the mogul.

I believe in love so deeply and will never be one of those people who support giving up on it. However, anytime betrayal and / or violence is included in the relationship, it is no longer healthy to remain simply because it brings more stress and dysfunction to the energy between the couple, as opposed to breeding joy and growth.

I hope that Tamar and Vince take some time to get the help they need to logically determine what is best for both of them, as well as what is best for little Logan. If they decided to stay married, I hope they chill out on creating all this drama and just live life!

By the way, shout-out to Getty Images and Tamar Braxton’s IG for the imagery.