After months and months of speculation, Kylie Jenner announced the birth of her baby girl in a sweet note to her fans on social media. 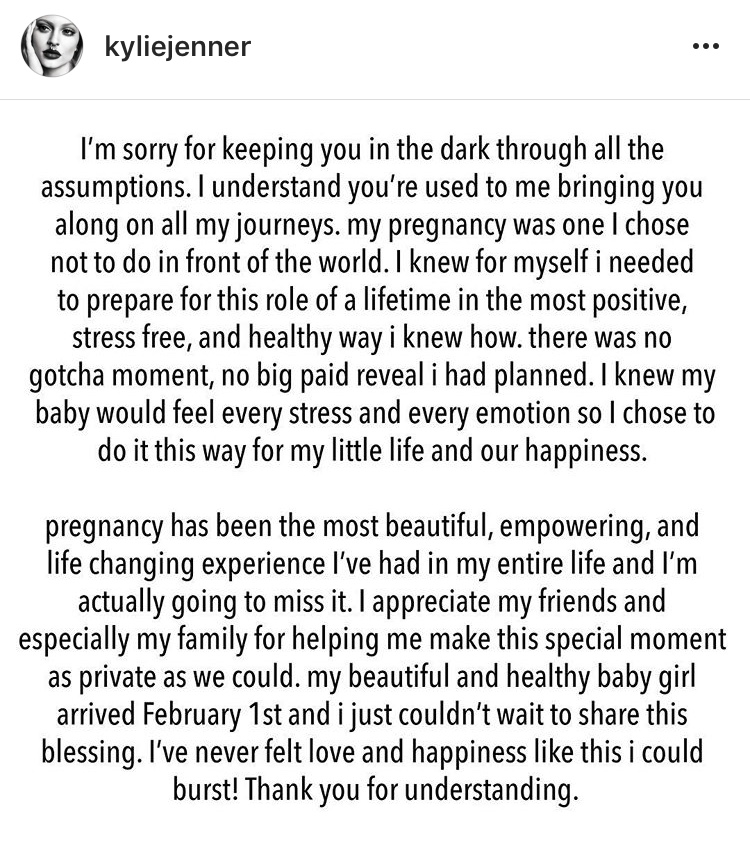 The newborn is Kylie and rapper Travis Scott’s first child. They have not decided on a name yet.

Kylie had never confirmed her pregnancy, which was first reported in September, and had stayed away from social media in the last few months.

“I’m sorry for keeping you in the dark through all the assumptions,” she said on Instagram on Sunday. “I understand you’re used to me bringing you along on all my journeys. My pregnancy was one I chose not to do in front of the world. I knew for myself I needed to prepare for this role of a lifetime in the most positive, stress free, and healthy way I knew how. There was no gotcha moment, no big paid reveal I had planned. I knew my baby would feel every stress and every emotion so I chose to do it this way for my little life and our happiness.”

“Pregnancy has been the most beautiful, empowering, and life-changing experience I’ve had in my entire life and I’m actually going to miss it,” she said. “I appreciate my friends and especially my family for helping me make this special moment as private as we could. My beautiful and healthy baby girl arrived February 1st and I just couldn’t wait to share this blessing. I’ve never felt love and happiness like this I could burst! Thank you for understanding.”

Over the past couple of months, Kylie’s friends and family have played coy over the pregnancy reports. Kim Kardashian drank a sardine smoothie to avoid talking about it on The Late Late Show, while Khloe Kardashian and Kris Jenner also avoided spilling any details to Ellen DeGeneres.

And when asked about pregnancy rumors during an interview with Billboard, the new dad also played coy.

When asked by the publication if he’s spoken to his father about “becoming a father” himself, Travis replied, “Uh… for what?” When his relationship with Kylie and the pregnancy rumors were mentioned, Travis told the magazine, “I don’t want to talk about that. They’re just guesses. Let them keep fishing.”

The Kardashian-Jenner clan are all about building the family. Sister Kim Kardashian welcomed a girl, Chicago West, in January via surrogate. Khloe Kardashian is due in the Spring.