Did this just happen?!

We all know Kanye West is a firecracker. So why someone would want to come for him without being called is beyond all knowledge.

During lunchtime, as I enjoyed a delicious Tofu Pad Thai with Peppermint Tea, I perused through my Twitter timeline to see my thread was filled with Ye’s tweets and RTs of them from those that I follow. I had to research before giving you the juice.

My excitement for Mr. West’s new album, which he has been working on and tweeting about the progress for a few days…boosting our excitement, if you will, for the release date of 2/11/16. The album was apparently called Swish until last night when it was changed to Waves.  The album title change inspired Mr. Wiz Khalifa to step over all boundaries via the internet early this AM and post the following:

We know Kanye is very protective of his wife, Kim Kardashian, and that overwhelming emotion caused him to think that Wiz’s “KK” were Kim’s initials. Yikes! Peep the college dropout’s responses below: 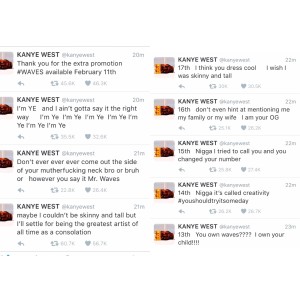 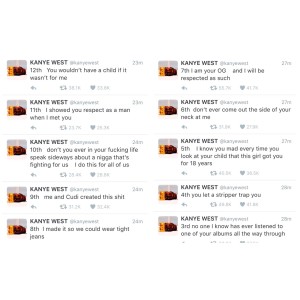 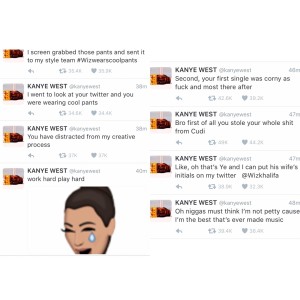 I must admit, I laughed as I saw this boiling live on my feed. The best part was when Wiz tried to clap back by claiming he was talking about a strain of marijuana that Wiz had made for himself and named “Khalifa Kush”:

Listen, we just can’t let the part about Ye owning Wiz’s son slip past us…sir, what? Ever since the marriage to a Kardashian, Kanye throws all the shade to Amber Rose as if he was not super in love with her circa 2008 – 2010. Plus, let us never forget Kim’s reason for fame – the oh so boring sex tape with Ray J. Tuh…glass houses, people!

While this was extremely entertaining on my lunch break, I do see the marketing of the new album booming (especially since I mentioned it as I’m sure other bloggers did as well). Also during this twitter debate, Kanye was slick in using his wife’s custom emoji line which can only be downloaded if you have her app. Smart moves, Mr. West…smart moves.

Meanwhile, I am still excited about the new album. Thanks for making dope music for us, Ye. Send me some shoes, please?!

By the way, big thanks to Getty Images and the celeb’s public twitter pages for the imagery. I love that you read Celebrity Slice today! Thank you so much for taking the time out to do so. Please share the fun with your social network of friends & follow us on FB, Twitter, & IG!