Last night, the Rihanna and Beyoncé concert (more commonly known to the general public as the MTV Video Music Awards) was everything we could have dreamed it would be! During the show, the Twitter timeline was on fire with conversations, questions that needed answers, and so many jokes, per usual. If you didn’t know, Twitter watches all award shows as a huge family… No, really…. It’s really amazing… Next time you should definitely join in on the fun!

Here are a few things we noticed from watching:

Beyoncé is becoming a legend before our very eyes. Her entourage on the red carpet consisted of many of the women that also starred in her Lemonade visual album, including our the mothers of victims of police brutality… And yes, they were all in perfect Formation. She performed half of the visual album Lemonade live and it was amazingly beautiful! Beyonce is arguably the greatest entertainer alive… And she sings (Not lip syncs… This was total shade to B. Spears who made a “come back” performing immediately after Bey and used prerecorded vocals #GetInFormationBrit) live for all her shows while she dances. That’s true talent! In addition, Blue Ivy wore an $11,000 dress and walked the red carpet with her mommy looking like the princess that she is. Perfection!

Drake is madly in love with Rihanna regardless of the run that shredded our eardrums. In his speech to present her with the 2016 Video Vanguard Award, he had so many onlookers thinking he was seconds from proposing to Rih. He even mentioned that he was in love with her, which made all of us who had multiple X chromosomes swoon. Rihanna performed four times throughout the show ending the night with a beautiful golden couture gown by Alexandre Vauthier. Prior to that performance, Rih looked amazing in Vetements and Juicy Couture performing “Pour it Up” and “BBHMM”, where at the end of “Needed Me” there was a slight voice malfunction causing an uproar amongst the fans. It’s okay, Rih, we still love you, babes… And so does Drake! Keep him, or bring him to me! 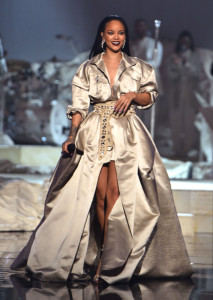 Michael Phelps is a huge fan of Future. He introduced Future’s performance and mentioned, “There is no rapper more inspiring than Future.” The ‘slick talk’ helped Michael become motivated during practice for the Olympics, which was honestly so dope to hear. This really didn’t really shock some long time fans of Phelps, however. He has always been the black sheep in the form of Aquaman for the USA swim team.

Alicia Keys is still on a makeup hiatus, but is not anti-makeup, and we are going to continue to let her be great. After the show, per Snapchat, she and husband, Swiss Beats, went making memories together in NYC (so romantic). During this time she must have seen the conversations questioning if she is really makeup free or if she hired a makeup artist to give her that ‘natural’ and ‘nude’ look. As someone who dabbles in makeup and has done shows where my face was professionally beat (this means the makeup looked really good), I can vouch for some MUAs having the talent to give that natural look, however, they normally at least brush on some bronzer, pop some mascara, and gloss the lips. Alicia’s face is believed to be just natural… Being that none of the simple steps mentioned above are done. If she is totally natural, we all need her to Tweet or Snap about her skin care process to get that even and clear skin. So necessary!

Kanye West’s art channeling Fame for his song ‘Fade’ featuring Teyana Taylor gave all XX chromosomes major body goals. Teyana has always been in great shape. However, only 8 months after giving birth to her child, her snapback game is on point! The video showed her dancing around a gym, followed by a sexy shower scene with her bae, basketball player Iman Shumpert. Kanye, in true south side of Chicago style wearing a white t-shirt, was given 4 minutes to do whatever he wanted prior to debuting the video. He decided to play presidential and give a speech. Vote for Ye! 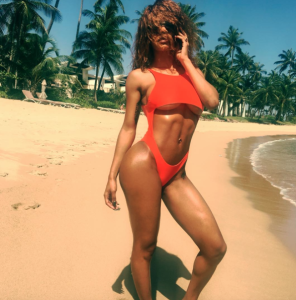 All in all, the show, and the post show especially when Chance the Rapper’s interview was adorably interrupted by Beyonce (his reaction is priceless), very entertaining! Congrats to all the night’s winners!

By the way, shout-out to Getty Images, and the social media pages of Alicia Keys and Teyana Taylor for the imagery.