About a week ago, a lot of buzz in the cyber world occurred surrounding, video model, Blac Chyna, declaring public claim to be dating (and oh so in love with) rapper, Future. Allegedly, she has been hanging out with him, also hooking up with him, and she publicly fell into all of the feelings, alone…poor thing.

If you are not familiar with Future, you may recognize him from his previous summer hit with Pharrell Williams, Move That Dope. Future also collected R&B singer Ciara as one of the mothers of his four children (yes, four children by four women…I’ll just let this sit here).

Blac Chyna, born Angela Renee White, made it known that she was involved and in love with the rapper by apparently getting a tattoo of the word, and his stage name, “future”, on her hand and putting the picture on her Instagram. 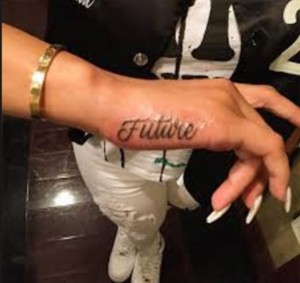 Future replied via Twitter by politely, yet bluntly, exclaiming:

…and then following it up with, “u know I don’t **** with no rumors”, basically throwing all the shade to Chyna.

Sources say that Chyna didn’t care about Future’s shady tweet because she was ‘happy being just one of the women he is tapping’. She claimed to be with him every weekend and although she considered the message he portrayed on social media as a definite low blow, she still considers him to be her man.

Although she claims all of this in the public eye, she was pretty swift in removing the picture off of her Instagram page after Future stopped her claim. She clearly was hurt.

Chyna has a son with another rapper, 25 year old Tyga, who is now the boyfriend of Kylie Jenner. She has had recent internet squabbles with Kylie and Tyga, so this cyber situation is not at all new for her. Let’s hope she soon comes to the realization that her son’s well-being is more important than other inconsequential things that she seems to choose to entertain.

Get it together, Chyna!